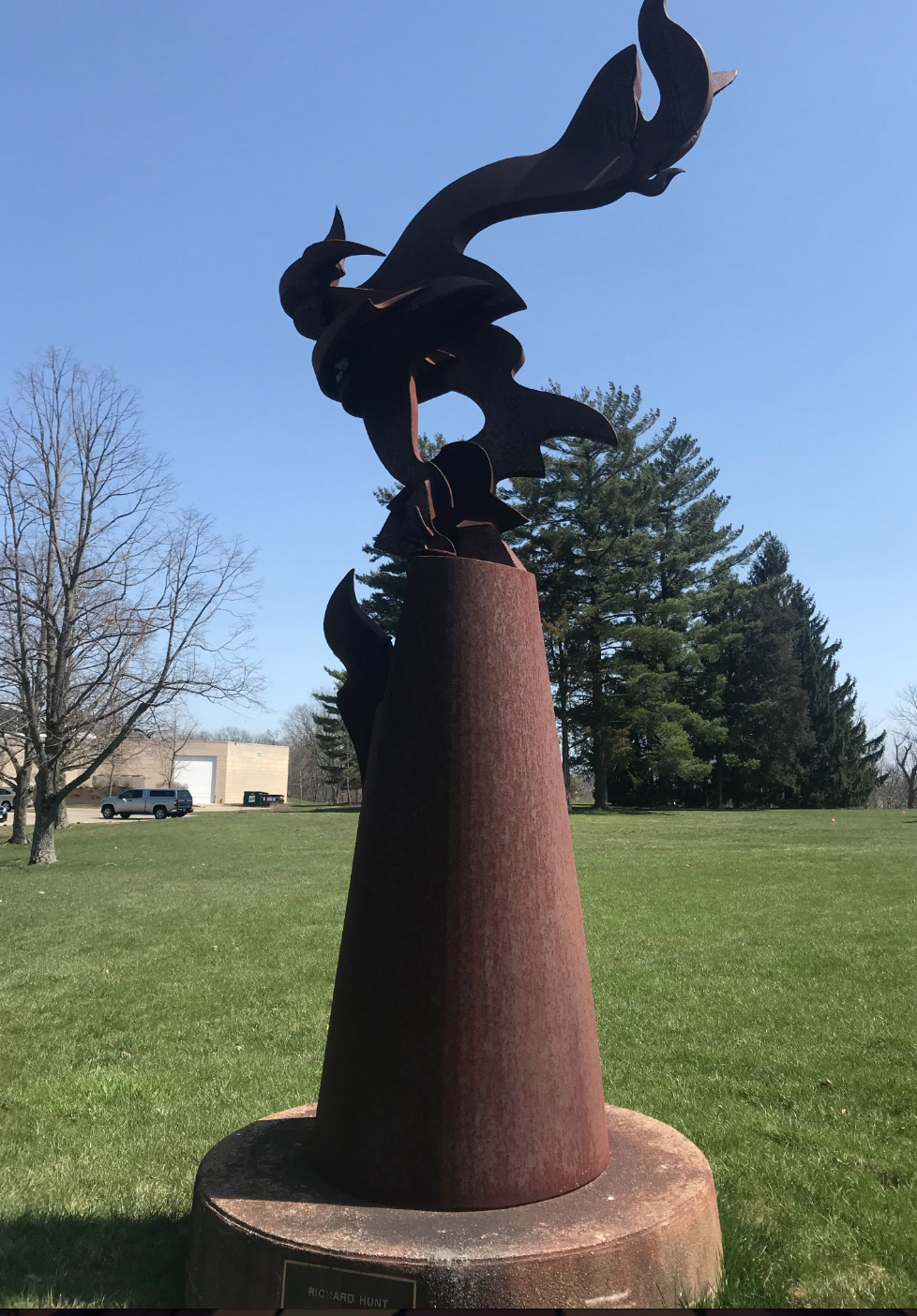 The sculpture is over eleven feet tall It is made of bronze-colored Cor-Ten steel set on a concrete pad. It was a gift from Ms. Patricia Wenzel Wolf. The workshop it was created in was Richard Hunt’s own workshop. It has been at Miami University Art Museum in 1991. Thus, Hybrid Construction’s acc. No. is 1991. 245. The artist Richard Hunt is a well-known sculptor in the United States. He was born in Chicago, Illinois in 1935. He has many public artworks in the United States, many of which are in and around Chicago’s libraries, community centers, office buildings and university. In Richard Hunt Biography, it states, “In some works it is my intention to develop the kind of forms Nature might create if only heat and steel were available to her”, which was from University of Notre Dame Art Gallery in 1966 (“Richard Hunt quoted in Exhibition flier”). Richard Hunt has played an important role in the public art. The resource states that “For more than three decades Richard Hunt’s status as the foremost African-American abstract sculptor and artist of public sculpture has remained unchallenged.” Hunt’s interest in metal sculpture was sparked by the metal works in the Field Museum’s African collection. Hunt’s works were about “welded and cast steel, aluminum, copper, and bronze”, and his abstract creations make frequent references to “plant, human, and animal forms”. In short, Richard Hunt is called a “Midwestern sculptor”. Because of the 1950s exhibition the “Sculpture of the Twentieth Century” that was held at the Art Institute of Chicago in 1953, Hunt had significant influences from the work of Julio Gonzalez in the exhibition. He had many sculptures in the Chicago, causing him becoming one of the famous African-American sculptors who works in his hometown.

According to the primary resource “Intermuseum Laboratory---Treatment Report” states, “The sculpture was resited to be recommended location on 27 September 1994” (Present location). Because the material is Cor-Ten Steel, it is supposed to rust and form a protective oxidized surface that protects against further degradation. However, with the time, rust continues to advance after the surface has been oxidized, causing many pinholes on the whole sculpture. The sculpture has a band externally approximately three inches wide on the bottom. The label is on the band, states, “RICHARD HUNT. Hybrid Construction, 1983, Cor-Ten steel, welded. Gift of Patricia Wenzel Wolf”. In the upper part, irregular steel inlay to make it. Form the different perspective, each part is closely connected. Viewed from the side, the shape looks like a hand on the top, supporting something. Actually, Hybrid Construction is one of contemporary public art in the 20th century. 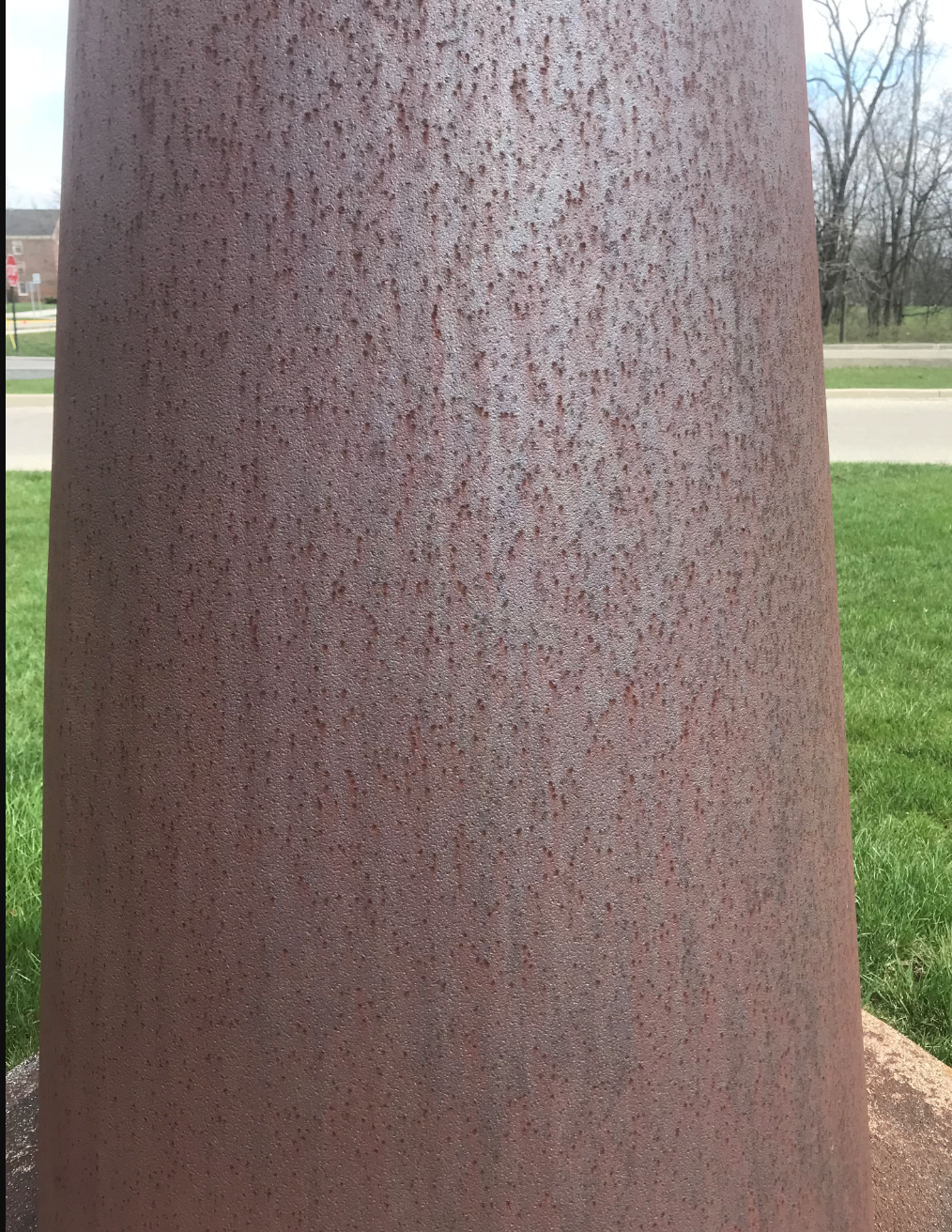 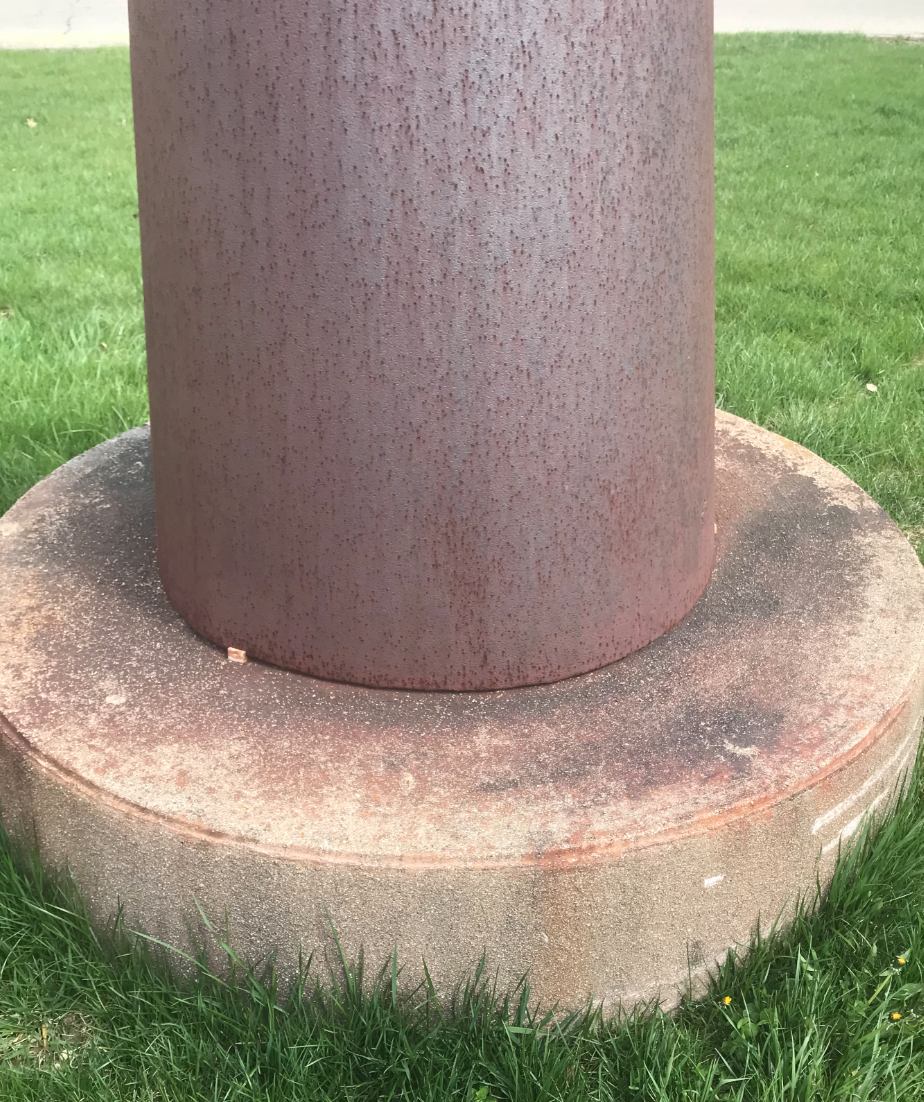