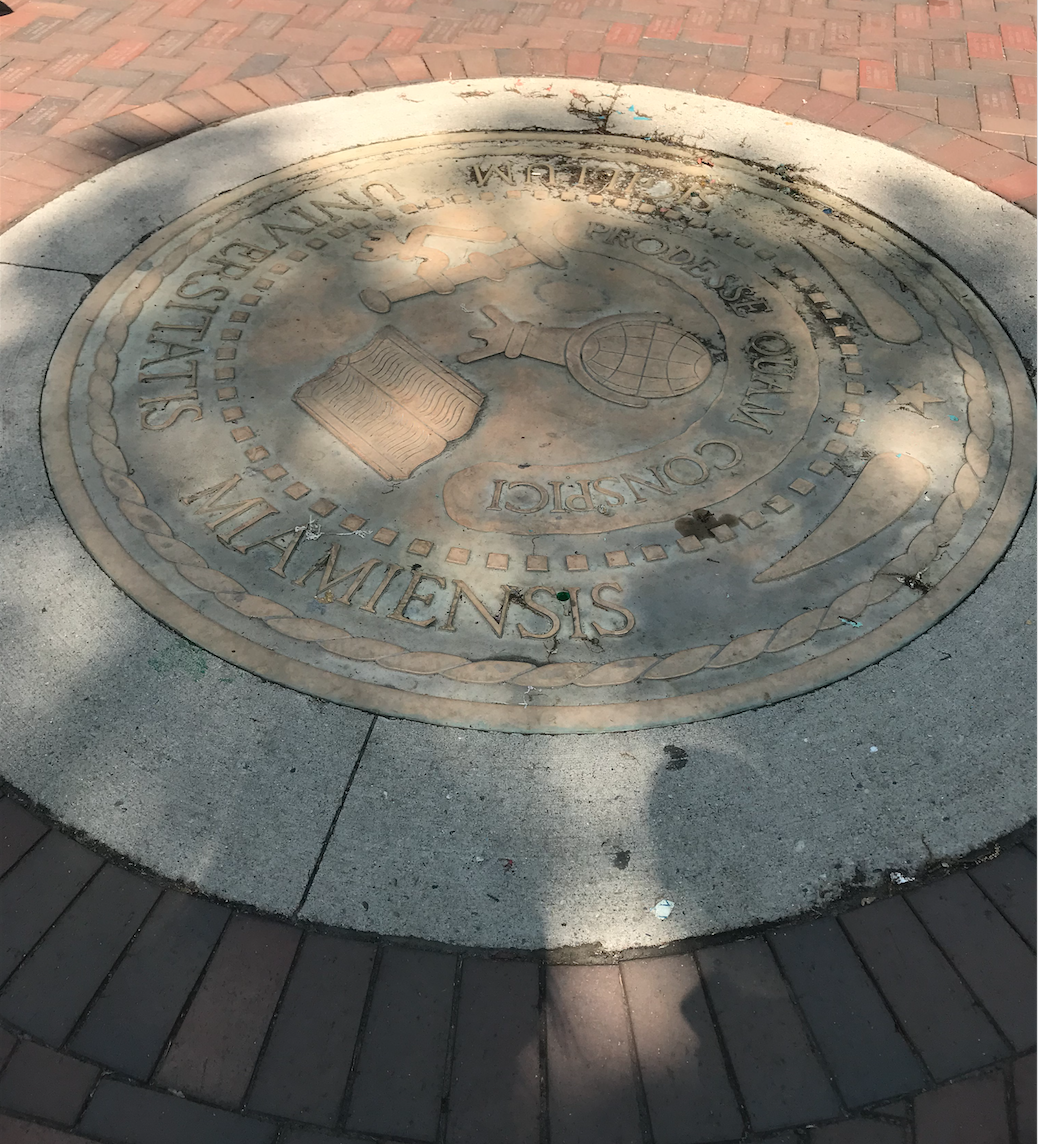 The University Seal sits in the heart of campus, west of Upham Hall. It has become a symbolic space for Miami University, Hub Quad. The University’s Director of Planning Architecture and Engineering indicated the University Seal had no artist involved and they had no record of who the foundry or fabricator was. It was installed in 1968 and made of bronze. The University Seal is six feet in diameter. This is obviously a sculpture. In the middle of the University Seal, are three symbols: an open book, a globe, and a telescope. The open book symbolizes “the past”, indicated the importance of reading because it represented the accumulated wisdom of the centuries. The main point that the book is open, thus, it also represents the spread of new ideas. The global symbolizes “the present”, represented although people live in various countries, we are still together. We need to know about the cultures of the countries, and the earth. The telescope symbolizes “the future”, represented human being explore and develop the meaning in the universe. The telescope is an important tool for the process of exploring and developing. Actually, Dr. Phillip R. Shriver who is President Emeritus and Professor of History, explained the meaning of three symbols on the University Seal He served as the 17th president of Miami University and retired as President of Miami University in 1981. During these 16 years of his leadership, he raised the level of education. According to the newspaper “The Miami Student” on Tuesday, November 12, 1968, it mentioned “The seal of Miami will be placed into the foundation hole. Future developments include eight pie-shaped divisions on which a representation of some notable event at Miami will be depicted. Beta Theta Pi, Alpha Omicron Pi, and the classes of 1964 and 1966 have donated funds for the project.”

On the top, three words “Prodesse Quam Conspici” in Latin revolved around three symbols. It means “to accomplish rather than to seek fame.” In fact, “Prodesse Quam Conspici” also is the Miami motto to remind students. In addition, “Sigllum Universitatis Miamiensis” on the bottom translates into the name of “University Seal”. Furthermore, the University Seal is one of Miami traditions. Legend has it that if you step on The Seal, you will fail your next exam and will be punished. Thus, students always avoid The Seal.

This official University Seal was adopted in 1826. Because of its location, the University Seal plays an important role in Miami University. Except this University Seal in Hub Quad west of Upham Hall, the three-dimensional version Miami Seal is in Armstrong Hall by Robert G. Keller. It used the real objects, including a real open book, a real global of earth, and a real telescope. With the coming of the graduation year, some students are willing to take photos with this seal because it is the symbol of Miami University. The meaning of University Seal has continuing influences on students, respecting Miami University's culture. In a way, it also represents students respect Miami university’s history and values. 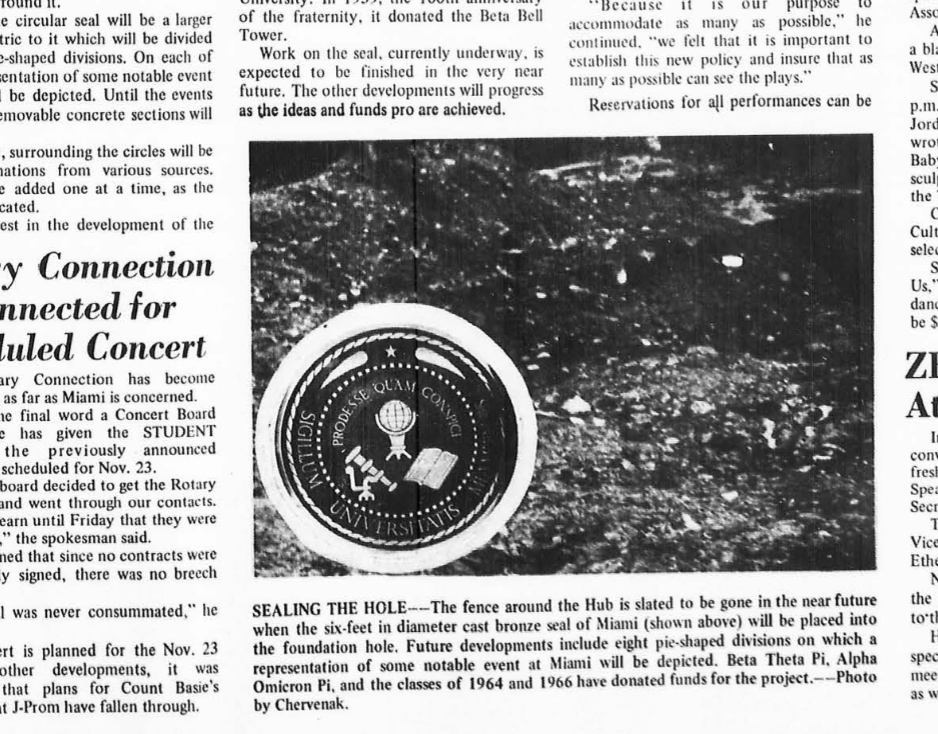 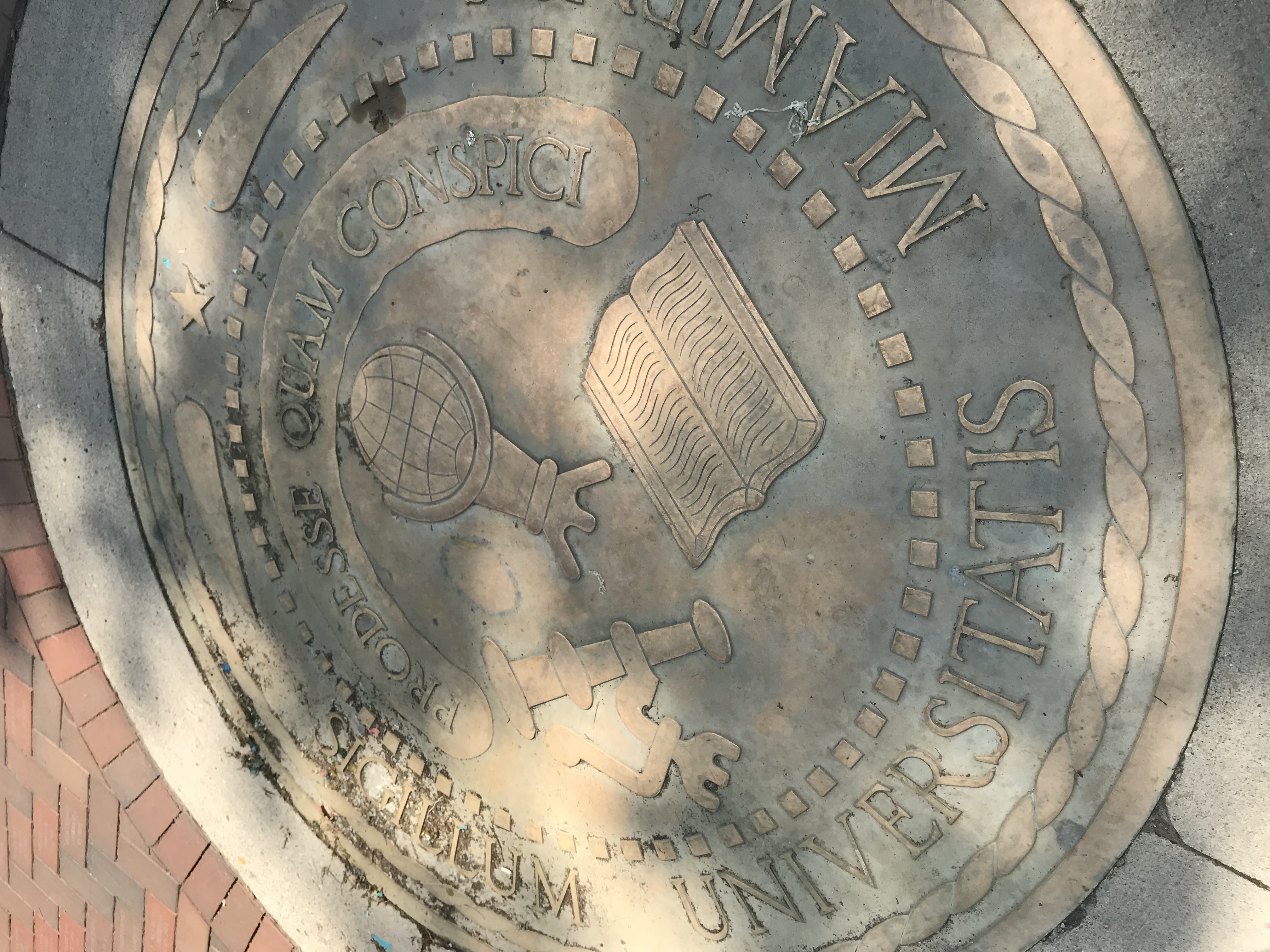