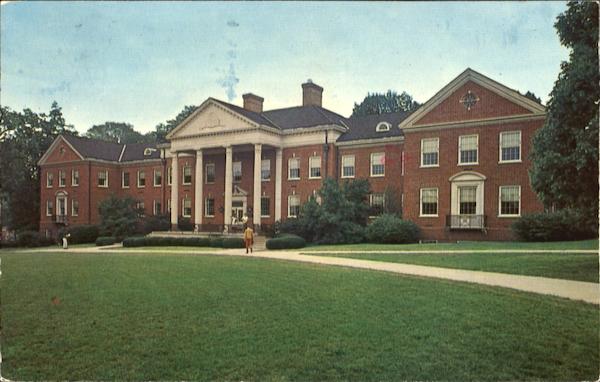 Roudebush Hall is home to Miami University’s administration offices. Throughout the building there are numerous artworks, especially by Miami professors, throughout the building. Built in 1956 the building was designed by the architect C.F. Cellarius. The Building under went renovations from June 2000 to November 2001.  Joseph Cox, a former chair of the Art Department was a huge supporter of having art displayed in public spaces on campus. He then went on to become the Associate Provost for the university, which put him in charge of space on campus. This gave him the ability to allocate artwork to available spaces on campus. He began in Roudebush Hall yet the final goal was to place art in all plausible spaces on campus. Faculty members including Ernesto Montes, Rodney Coates and Ellen Price created the work in Roudebush. The painting Untitled by Professor Ernesto Montes, the numerous prints created by Professor Ellen Price, and photographs of Professor Rodney Coates line the walls of the building. This demonstrates a sense of pride for the talent that lies within the faculty of the university. These works were purchased by the administration to put in the buildings and many of the proceeds funded scholarships for Miami students. It is interesting to note the placement of these works throughout the building. In the lobby of the building there is a large-scale painting by Professor Ernesto Montes. On the first floor one can find the print by Professor Ellen Price. The second floor, opposite the president’s office, is home to photographs by Professor Rodney Coates.

The painting in the lobby, Untitled by professor Ernesto Montes, is abstract in style. The impasto as well as the vivid colors and diagonal lines running across the canvas create a dynamic piece. This painting could be a staple of the building if it were not tucked away to the side of the staircase. This is one of the only pieces in the building that is less pronounced. Its grand scale does however catch one’s eye as one walk up the stairs, but the banister still slightly obscures the viewer’s line of sight to see the whole painting. The painting is largely comprised of natural colors, which recall natural elements. There are also brighter colors woven throughout which draw ones eye across the canvas. Additionally, the lines on the canvas help to create a more engaging painting.

The two photographs by Professor Rodney Coates titled Naked Sunset and My Inspiration as well as the four prints Staked, Vestigal, Uproot and Needle Tree by Professor Ellen Price, are located on the second floor surrounding a desk opposite the entrance to the presidents office. The photographs by Rodney Coates were donated by the artist to Roudebush to support  the Hope Scholarship for Underrepresented Students. The work by these three artists make up half of the collection in Roudebush, see the next entry about this building for the second half of the collection.